It's been a little while since our last post so here's the latest news! :) 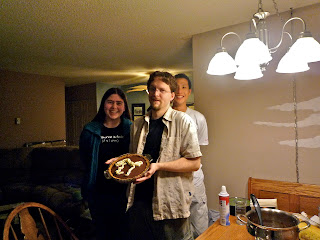 Nathan holding a Pi Pie and looking skeptical.
First off Nathan is doing really well. He can now:

1. open his mouth!! (and he only has to wear his rubber bands at night!! yay!!)
2. eat with a spoon!!
3. walk without causing pain to his jaw.
4. smile nearly symmetrically (and he even has his dimple back!)
5. talk on the phone and be understood by the person on the other side.
6. sort of "chew" soft things!!!
7. wink his left eye (and bonus, he can now close his left eye well enough so that he doesn't get soap in it)

We are still waiting to see how much his facial nerve continues to recover, they said it can take months before we'll know. Parts of his face are still numb, and while he has move movement in his left eyelid, his left eyebrow is still recovering (ie. it doesn't move yet, this has allowed Nathan to perfect his new "skeptical look" which consists of him raising his right eyebrow exclusively, it's a pretty convincing look). Monday he goes in to get his wire bands taken off, and Tuesday he has his dental appointment for his broken tooth!

He's also jokingly promoting the "wired jaw diet." The oral surgeon said it's normal for people to lose around 15 pounds when they break their jaw (due mostly to it hurting a lot to eat and drink in the first weeks post surgery). Nathan is no exception and has lost his 15 pounds; turns out weight loss is easy if you can't eat anything. Probably not the best or healthiest way to reach your goal weight, but there you go. We'll be working on incorporating exercise back into our routine slowly and hopefully we'll be a bit more balanced and healthy soon (Nathan couldn't do much running or walking earlier because the impact jostled his jaw).

First off, we had a lovely Pi/pie day on March 14th (3-14) with our small group. We made two pies to celebrate, a chocolate pudding pie and a chocolate oreo pie. We made the choice for pudding because 1.) Nathan can eat it, and 2.) We already had all the ingredients. :) 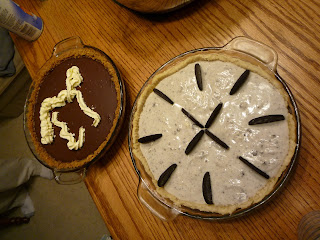 We also went out to eat for the first time since the accident (and ordered real food!!). Our friend Margaret just passed her Master's defence this last week so we took her out for a celebratory dinner at Rock Bottom Brewery. Nathan got the Bacon Mac and Cheese and was totally up to the challenge. :)

I forgot to take my camera, so this is an image I found online of Rock Bottom regular Mac and Cheese. Please imagine bacon on top for a more representative image.
Lastly, we were lucky enough to have our friend from Seattle visit us. :) Nathan was stuck grading the day she was here, so we had a girls night out at Disneyland which was super fun. I tried to convince her to move down here so that we could go to Disneyland together all the time, but she seemed hesitant, something to do with already having a house and a job elsewhere.... sigh... it was worth a try... 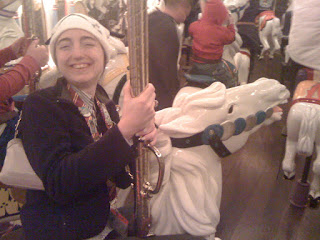 riding Charger on the King Arthur Carousal... Yes, we named our horses 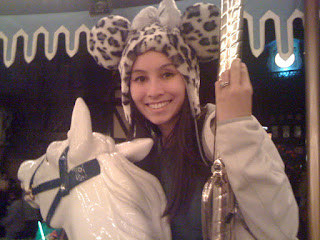 Mine had a lion painted on the side, so at first I thought I'd name him Aslan, but then that seemed like a weird horse name, so I tried to change it to Bree, but the ride was already halfway over... so I'm not sure if it counted. 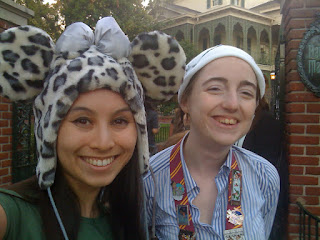 About to get spooked at the Haunted Mansion!
That's it for now, more recipes and updates to come soon!
Elizabeth and Nathan
Posted by Anonymous at 9:57 PM