Well we are in week 3 now. Nathan's starting to feel a bit more peppy, but it's still a slow recovery. When they did the surgery they had to move one of his main facial nerves which resulted in his face being mostly numb on his left side. Recently his nerve has begun to recover (yay!) but that also means that he's getting random bursts of pain now that he can feel that part of his face again (boo!).
Today Nathan rode his bike again for the first time since the accident. I think we need to take it into the shop to get it aligned, but it worked ok for the short distance we went today. It's important to show the bike who's boss, wouldn't want it to get any crazy ideas.
While Nathan did get some of his rubber bands taken off last week he still has enough on that he can't open his mouth to get a straw or a spoon in so we're still doing the super pureed soups so that he can drink it through his teeth. Here's the recipe for a butternut squash soup we just made. :)
Ingredients:
1 - largish butternut squash
1 - onion
32 oz. - chicken stock
1/2 cup - cream
1 tsp - marjoram
dash - cayenne pepper
salt to taste 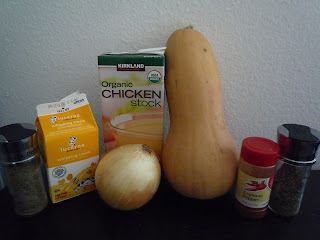 Start by chopping the onion and softening it in a soup pot with the butter. 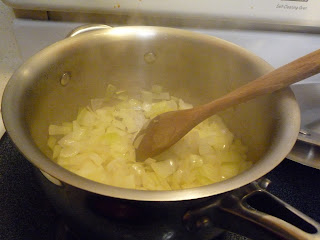 Next start peeling and dicing the butternut squash. This is kind of a pain, and actually I read later online that instead of doing this you can just cut the squash in half and roast it in the oven for a while (here's a link to some instructions I found). Then when you take it out you can just scoop the soft insides out. I think I'll do it that way next time. 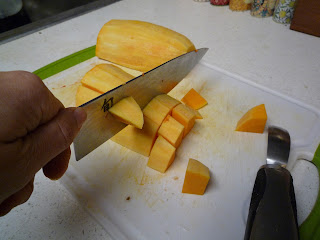 But, since I did do it the hard way, I though I'd show off this nice bowl of butternut squash cubes. The squash I picked filled two bowls of this size. 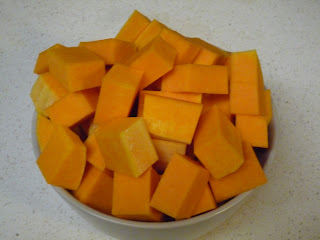 Ok, and also a close up, cause that was hard and I'm not doing it again. :) 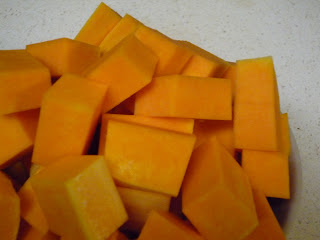 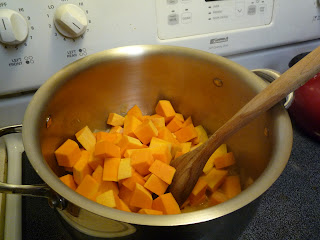 Next add you spices, mush everything around for a minute, and then add your stock. 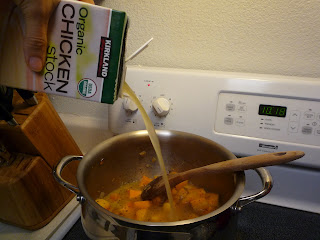 simmer until everything is tender 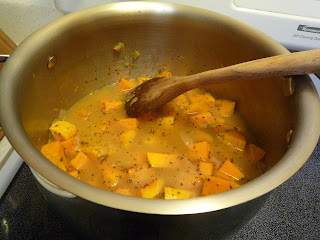 and SURPRISE! next put it in the blender! 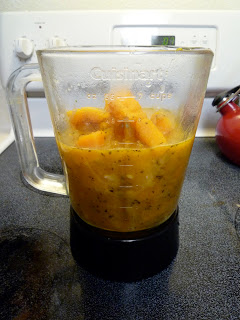 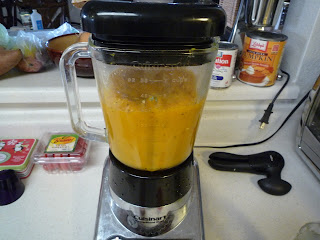 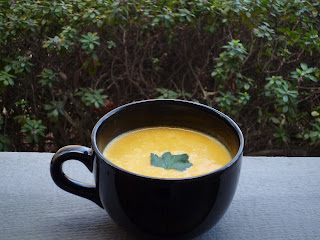 Take a picture of it on your balcony but zoom in really far so that people can't tell that the view from your balcony is really a parking lot. Enjoy!
Get well soon!
Elizabeth and Nathan
Posted by Anonymous at 7:30 PM