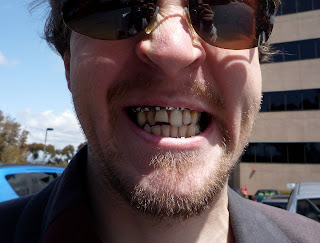 these babies are GONE!
We are happy to announce that as of 4:00 today Nathan is arch bar free! No more pokey wires jabbing his gums, no more getting his lips snagged when he tries to talk. He had to go under anesthesia to get them taken out (they were embedded in his gums somehow, I prefer not to think about it too hard). The whole procedure was pretty quick and when he came out he was super chipper and chatty, I think a mix between recovering from being "under" and excitement about being able to talk pain free for the first time in weeks. He's still pretty happy, in fact, he just walked by and showed my his gums again (you know... as you do).
The nurse informed me that his first words when he came out of surgery were "I can smile!!" Which was nearly on par with his first words when he came out of surgery last time which were "I can run across the parp!" (albiet in written form since he couldn't talk last time). Click here for context.
Get well soon!
Elizabeth and Nathan
Posted by Anonymous at 9:30 AM