August
In which we move to another state, Nathan starts his new job, and we make an offer on a house.


Our move up the coast happened in two parts because Nathan had a week of training in Mountain view. This was perfect because since we were driving we were able to spend a full weekend driving from San Diego to the Bay Area, and then another full weekend driving from the Bay to Seattle. We do this drive a lot, but usually only have two days to do it, and even the shortest path is still around 24 hours of driving. It was really nice to get to split it up into smaller drives and actually get to see some of the things we had driven past before. 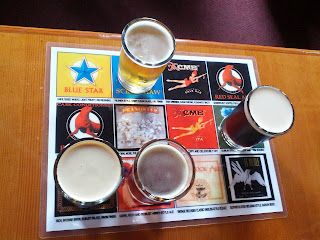 Our first driving day we were able to visit with my Uncle, which was really special because he had just had a minor heart attack. He was doing really well and it was really nice to get to chat with him, although we did make sure to keep our visit on the short side so that we didn't wear him out. We spent the evening in Lompoc CA where we had surprisingly good Panda Express for dinner and went for an evening bike ride on the river path. This was the first of several bike adventures, we figured since we were moving our bikes up to Seattle with us anyway, we might as well take them for a spin on the coast.

Our second cycling stop on the drive up was at Morro Bay. We browsed through a small farmers market, stopped at a candy shop for salt water taffy, and saw SEA OTTERS!!

Once in the bay area, Nathan started his training. He really loves the team he's on up here in Kirkland, and it was really exciting to finally be starting on something new after years of grad school. While Nathan was at work, I worked on finalizing my CSCW paper for reviewing. It was actually really fun to be in South Bay because a couple of my good friends were also working on their papers, so we were able to set up a couple writing "parties" at Stanford (Where party means sitting together and typing, and taking occasional chatting and coffee breaks).


I also spent some time working in the hotel room and on the Google Campus (where I tried to look like I was not a creepy squatter). I also got to work outside with one of my favorite friends who now works at Google, and afterwards we went house shopping together and shared a fantastic meal at her auntie's house after.


We finished the rest of our drive up the following weekend after Nathan's training. The first night we  stayed at a B&B in the Russian River Valley and got to stop at a local winery for a champagne tasting. This weekend's drive was a bit longer than the previous weekend's but we did get to stop at Fort Bragg for lunch at the Northcoast Brewery and see the glass beaches there. We also got to stop at the Tillamook Cheese Factory and for ice cream and a grilled cheese sandwich. :)


We made it to Seattle in time to celebrate our nephew Caleb's first Birthday. He was super adorable and it made us super happy that we'll get to be living so much closer from now on.


My parents were super gracious to us and let us stay with them while we were house shopping. It was really nice to get to spend time with them and we are really grateful they had space for us and our carload (and our giant penguin).

Posted by Elizabeth at 1:27 PM