I broke our move up into a couple posts so that it didn't get too long. Here is the final chapter of our drive up the coast. :)

After driving from San Diego to San Jose we stayed for a week while Nathan completed his first week of training at headquarters. This was really nice since some of our best friends live in the Bay Area and this gave us a chance to see them. Unfortunately, we only managed to take one photo while visiting friends, here it is: 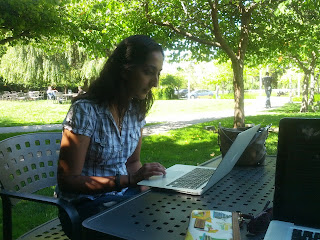 Roshni and I enjoying the sunshine and working at the Googleplex. :)

I was also able to go and have some writing dates with some friends on the Stanford campus and also took up residence at a local Starbucks for a while. One day I just holed up in the super comfortable hotel we were staying in and wrote from bed while watching the Olympics which was also nice. :) Nathan of course spent his days working from the Googleplex. 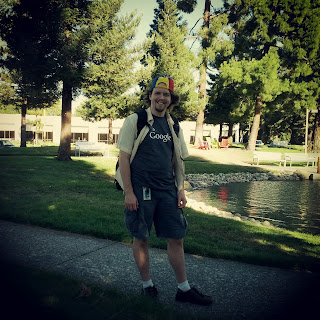 Nathan after his first TGIF and induction as a Noogler

After work Friday we hit the road north to for our stay at the Santa Nella House B&B in Sonoma County (just north of San Francisco). 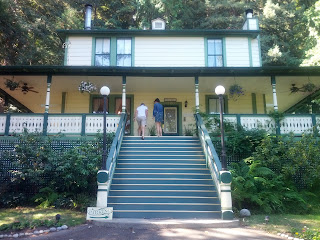 It was super-duper adorable and wonderful. (Oh my gosh! does that porch wrap all the way around? yes it does! is that a porch swing on the left? yes it is!) 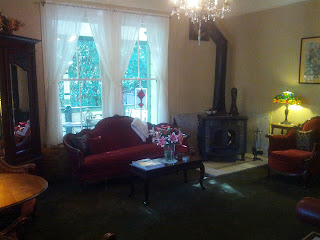 Living room. When we showed up that evening they had fresh pie and port waiting for us as a welcome! :) 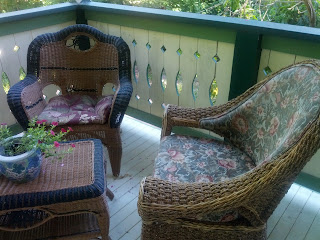 Chairs on the wrap-around porch 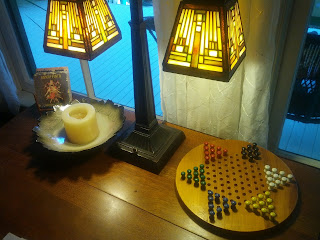 Nathan and I played Chinese Checkers, he won though... :P 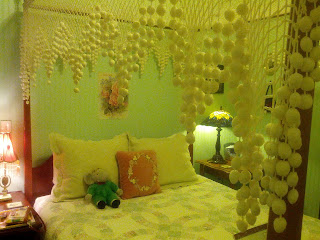 Our super cute bed, Babar is testing it out. You can tell by the look on his face that he approves.
I forgot to take any pictures, but they also had their own chickens and they used the fresh eggs in the breakfast (which was homemade yogurt and granola, home baked banana bread, and a veggie frittata with local sausages and roasted potatoes... sooooo good).

We only got to stay one night because we had to keep moving up the coast, but I think I want to come back and live here forever for a week... or at least a long weekend? :D 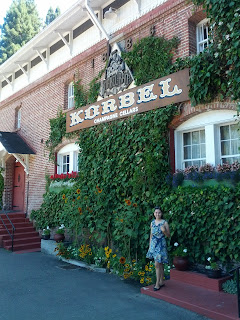 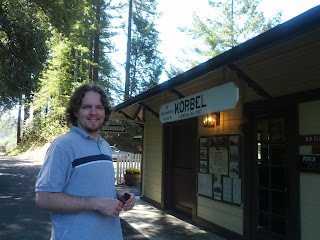 They give free history tours too, but we sadly didn't have time this time. (maybe next time when we stay a week...? Ok, I really hope that happens now) 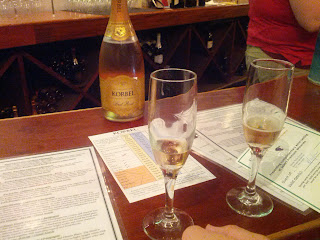 In the tasting room. We brought home two bottles, a red champagne and... hmmm... I forget... another champange? 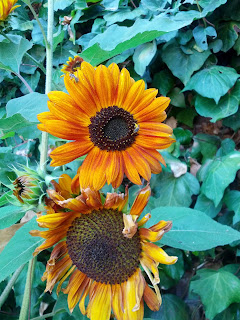 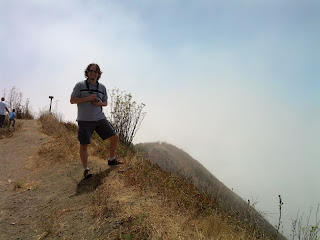 After that it was time to hit the road north (Don't worry Nathan didn't actually have that much champagne, and we walked a bit before we started driving again). 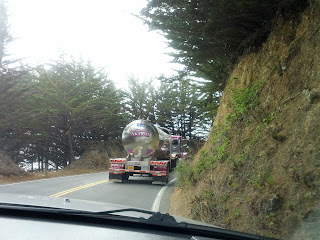 We drove along behind this truck for a while, which it appears is full of wine? Only in California... 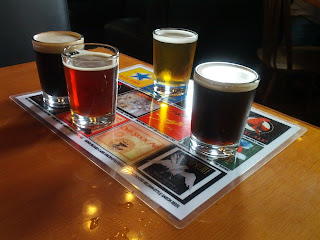 We stopped for lunch at the North Coast Brewery in Fort Bragg and got some fantastic food which I forgot to photograph (a Catfish BLT and a BBQ pork sandwich). We also shared a beer sampler, which I did photograph and it pictured above. I really should have remembered to photograph the food, since now it looks like we just spent our whole day drinking... sigh. 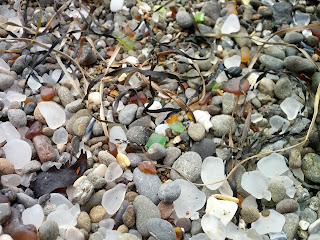 Fort Bragg is also home to several glass beaches. which are beaches that are mostly covered in sea glass. Apparently this is because a long time ago the city used to use the beach as a dump and eventually only the glass was left. I have to say, it's the nicest dump I've ever been too. And really, how clever! They figured out a way to not only dispose of their trash, while creating a unique beach, they also have convinced other people to carry their old trash away for free (thanks beach combing sea glass collectors). 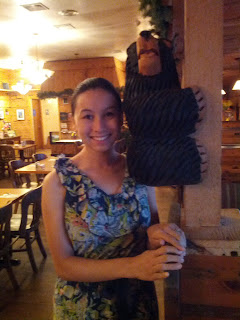 The next night we stayed in Crescent City where I found this cute little chainsaw bear who reminded me of Brave. Yes, I am wearing the same dress as the day before... somehow my luggage with my clothes got buried deep in the car when we packed up and it was too hard to get out. At least I like this dress? :) 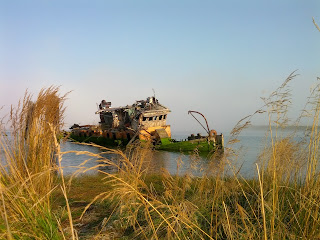 In Gold Beach we stopped to take a photo of this cute boat. We take a picture every time we go past, it's lookin' a little worse for the wear here, but also kinda cute still. 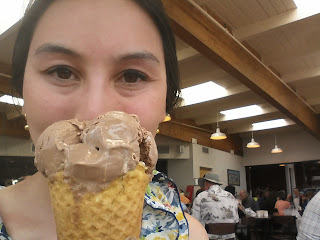 Next stop was the Tillamook Cheese factory for a late lunch. It was a long drive and we were both hungry, but it was worth it. Here I am with our S'more flavored ice cream. 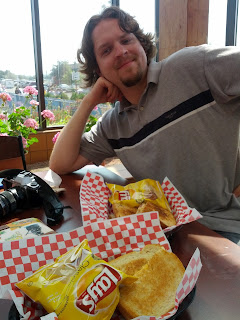 We also got a grilled cheese and a reuben. Grilled cheese was better though, next time we'll just get two of those. :)

From Tillamook we finished the last bit of Oregon coast to get to Astoria, OR and then cut inland to get back to  I/the-5 (depending on you are a Seattlite "I-5" or a Socaler "the 5").  Traffic was a little backed up through southern WA, but in the end we got to my parent's house at around 10, not bad for having started on the Norther California coast that morning. :)

So Hello World! We are now Washingtonians!