November
In which we celebrate Thanksgiving across the entire West Coast, and I see a Disney legend

So it was our first November in 6 years where we would be close to Seattle for Thanksgiving, but through an interesting set of opportunities and contraints, we ended up spending it in San Diego instead. Two big factors played into our decision.


1. We left a car load of things in a storage locker in San Diego and we needed to move them up to avoid the monthly fee. Thanksgiving weekends would be a great opportunity to do that without having to take lots of extra vacation days.
2. Our good friend Naomi would be visiting the San Francisco from Scotland and we wanted to see her. LB and her fiance would be visiting her too, along with our long time friends K&C, so it would be a mini Bay Area reunion.

We decided to drive down to the Bay area the weekend before Thanksgiving, just in time to meet up with everyone. Nathan was able to work in the Mountain View office that week and made very good use of the time by meeting up in person with people with whom he usually has to have remote interactions with. I also had to work on paper reviews for part of the day, but after work we were all able to cook and hang out together which was really nice. We used to all live in San Diego together and now we live all over the world, so it's rare when we get all of us in one place. :) I failed to actually take any pictures, but we had a very fun time and there was even a very pretty pistachio and Raspberry birthday cake made by LB for her fiance.

Right before Thanksgiving we continued our treck down the coast to San Diego. LB and her fiance were able to join us so it was a really fun time. We took the scenic way back through Big Sur which in retrospect may not have been the wisest decision, given the amount of traffic we hit once we arrived at LA in the middle of rush hour, but it was really pretty, and may have been worth all the traffic stress later (even if at the time we would have traded our right arm/firstborn for a functional carpool lane).

We stopped at the Firestone Grill in San Luis Obispo for a tasty BBQ lunch. Consensus is, don't mess around with the brisket, just get the pulled pork sandwich. Also if you order fries or onion rings, split the sandwich with a friend.

After a long and arduous trek through LA traffic, where we were perpetually 4 hour away from our destination, we finally made it to our friend Kristen and Dave's house. They were super wonderful hosts even though we were much later than we had anticipated. It was nice to chat and catch up since we used to all live in San Diego together too! :)

The next day Nathan took me for our final Disney date of the year. I think I've said it before, but he is my favorite Disney buddy so it's always extra special with him. This time I had something special planned and so I asked the captain of the Mark Twain river boat if we could ride in the wheel house. Nathan had never done that before and it was really fun! (I had tested out asking with Emily earlier in the month, just to make sure it was possible because I didn't want to get Nathan's hopes up and then have it not work out). They let you turn the wheel, toot the horn, and ding the bell! We also got to chat with the Captain while we floated through the rivers of America which was really fun.


At the end of the evening Nathan surprised me with a Balloon! It is the best balloon in the whole world! It is a Mickey Balloon inside of a giant clear balloon with snowflakes on it and on the inside there is a color changing LED that flashes red, green, and blue at different intervals!!! I have secretly wanted one for a long time and I was super duper excited when Nathan appeared with one!

We wrapped up the evening watching the holiday fireworks show together and driving back to San Diego for Thanksgiving.

We spent Thanksgiving morning on the beach. It was surprisingly empty, I guess the beach is not popular Thanksgiving spot. We walked to the pier and sat on some rocks and watched the ocean together while eating some sandwiches we got from Schlotzsky's, pretty much the perfect Thanksgiving brunch. Then we headed over to our friend Chris' apartment to play board games and celebrate Thanksgiving with the Graduate Christian Fellowship group.


I brought my balloon to Thanksgiving too, I think it had a good time. It certainly made new friends! 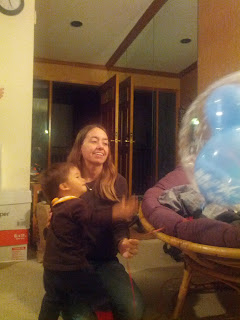 The day after Thanksgiving we headed up to my Uncle's house to see him, my aunt, and my two cousins! One of my cousins I hadn't seen since I was a kid since she now lives in Arizona. It was the first time our husbands got to meet and we also got to meet her adorable one-year-old daughter. We also got to see my cousin who lives in the LA area and her husband and kids which was really fun. I played some bop-it and DIY mini golf with the kids, which turned out to be more fun and challenging than I expected.


We spent the night and headed out the next morning to make it to Nathan's Aunt and Uncle's house in Davis. We have felt so lucky to get to know them better through our travels up and down the coast. They are really fun people and it was even more special because we also got to see Nathan's cousin who was also home for Thanksgiving.

The rest of our drive was just the two of us and we tried to sample some fun spots along the way. We stopped for lunch in Medford where we found Jasper's Cafe, a teeny tiny AMAZING burger place. Nathan got the Kangaroo Burger with katsu Steak sauce and pomegranate raisins, and I got the wild boar burger with hot BBQ ranch sauce and pepper jack cheese. They were amazing. 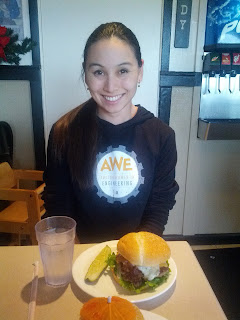 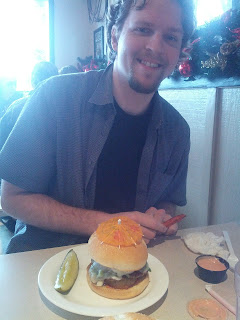 I went to Disneyland with Emily for the last time on her pass. They were just starting to decorate for Christmas so we got a cute shot in front of the tree. We also rode in the wheel house together and while we were on it the steam valve in the horn got stuck open. The horn was stuck on for over a minute, and then we had to use the bell in place of the horn for the rest of the trip.


I also was invited by a good friend to go see Alan Menken live in Seattle. HE IS SO COOL!!! He wrote the music for Rapunzel, Little Mermaid, Beauty and the Beast, Little Shop of Horrors, Aladdin, Encanted, The Hunchback of Notre Dame, Hercules, Pocahontas, Newsies and many other movies and broadway shows. He talked and played and I almost died from cool overload. It was like a dream sing along where the original artist plays all the songs live. Here's a video from that night.

The Penguin didn't make many camera appearances in November, but the elephant and balloon did. Here they are together in Davis California

Here's a video I took on my phone featuring the balloon


And here's a picture of our family in the State of Jefferson. Betcha didn't know there were four pacific coast states!