Bicycles are useful but dangerous beasts, and even bikes which you believe to be tame and docile can occasionally surprise you with a wild streak. Just such an occurrence happened to our family last week when my husband Nathan's bike decided that instead of moving forward in an orderly manner, it would get it's wheel stuck in a pothole and chuck Nathan over the handlebars (not a nice idea bike, we're watching you...)
Fortunately Nathan had the presence of mind to catch himself with his face, and even more fortunately to find our housemate who helped him locate bits of his tooth and who also miraculously convinced him to go to the ER. Several hours later we got the news that his jaw was broken and he'd need surgery. Thus began our new life in the world of liquid dinners (and breakfast, and lunches, and snacks). Prognosis is that chewing is out for the next 6 to 8 weeks which means it's time to whip out the blender! (ok, actually we are borrowing a blender, cause we're grad students and don't actually own one... luckily we've got a good friend who has entrusted us with hers).

In our copious amounts of hospital time I started searching for ideas for what we could make at home and came away realizing that there actually aren't that many resources for people on liquid diets and those that do exist are strange... like blended spagetti... and pizza... not that I'm saying that those wouldn't be good... but I might not be emotionally ready for that yet. So in response to the lack of resources I'm using this blog as a place to compile the recipes we make, with the goal that they will be things that you would actually want to eat even if your jaw weren't wired (or rubber banded) shut.  :) 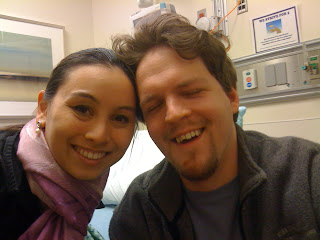 And for your viewing enjoyment, here we are hanging out in the emergency room (post-break, pre-surgery). Poor Nathan has his eyes closed because it is the law of the universe that we can never both have our eyes open in the same photo. :)

Get well soon!
Elizabeth and Nathan
Posted by Anonymous at 10:46 PM