Last year a new Sprinkles Cupcake bakery opened up walking distance from our house, an occurrence which was obviously a direct sign that we should be eating more cupcakes.

One of the best things about Sprinkles (beside beautiful delicious cupcakes) is that each day they have a secret whisper word which will score you a free cupcake. This seems to work well in theory, but in practice I always seem to walk out with my free cupcake and also seven dollars worth of other cupcakes that I couldn't leave without...

Anyway, since the day Nathan broke his jaw I had already guiltily eaten one Sprinkles Cupcake of which he not eaten even a single bite because, well, he can't bite anything. In light of this cruelty I had decide that I wouldn't get anymore cupcakes because that seemed mean. However, in a stroke of genius, it occurred to me that maybe I didn't have to go on an 8 week cupcake fast after all, maybe, just maybe I could BLEND a cupcake! Ok, it also occurs to me now that I might have a cupcake problem... but let's ignore that for now.

Once inside the store I inquired about which cupcake they thought might do the best in the blender, and after some deliberation we decided upon the classic Spinkles Red Velvet cupcake. Turns out that this is ALWAYS a good choice, even when your plans include blenders. 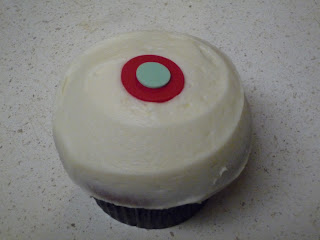 Little does Sweet Little Cupcake know of our plans... 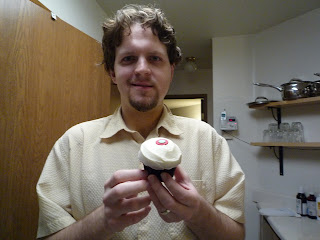 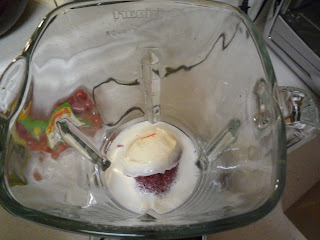 So is this Vanilla Yoplait yogurt. 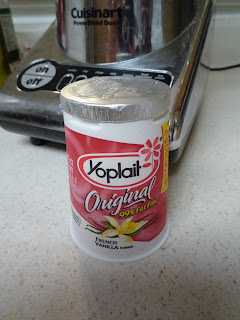 And Surprise! It actually turned out really nice and tasted just like drinking a red velvet cupcake. Plus it's really pretty. :) 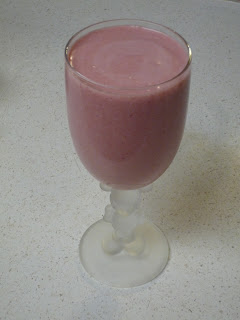 Directions:
Place everything in the blender and run until it is a smooth frothy consistency. Pour into a frosty glass and enjoy!

*note we also tried replacing the yogurt with ice cream and that was good too.

Get well soon!
Elizabeth and Nathan
Posted by Anonymous at 3:11 PM