Last stitch is OUT!!!

Warning: Don't read if you get squeamish about medical stuff. (the short story is, Nathan got his last stitch out, yay!) 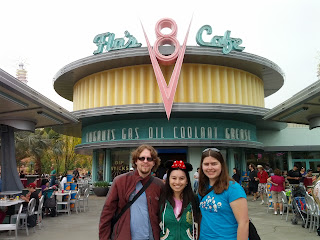 and just for fun here is a completely unrelated photo of us at Car's Land (since I figured that's way better than a picture of the stitch).

So when Nathan got his surgery in February (let's see, it's July now so that was like, hmmm... 5 months ago?) the surgeons sewed him up using an internal running stitch along his jawline. After about two weeks Nathan went in to have the stitched removed and everything went great, except that one stitch refused to come out.. at all. Tugging, pulling, no movement. So they suggested that we just try again next time we came in (we were coming in about once a week at that point). Next week, same story, stitch was totally lodged in there. In the end they decided to cut off the end that was sticking out and just wait for Nathan's body to reject the stitch.

Interlude of much time, eventually the surgeons suggest that maybe it was a dissolvable stitch. Nathan's pretty sure it isn't though cause he can still feel it inside his face (gross, but true).

And so things progressed, until this last Saturday, July 14th. After nearly five full months of being lodged in Nathan's face the stitch came out!!!! It was about 3/4 of an inch and you can even see a knot in it, which was probably what caused the lodged-in-face issue in the first place (hmmm... naughty knot!!).

Ok that's not a very exciting story, but something we've been waiting for, for a long time. :) In reality the best thing about it is that he has a lower chance of infection there now because his face can heal around where it was.

So almost fully recovered now from this bicycle-face-pavement fiasco. We'll keep you updated on the eyebrow. :)

Posted by Elizabeth at 4:28 PM